Brief History of the Club

Bob Bucher, formed the Deep Sea Fishing Club in December of 1995.  He initiated an article in The Daily Sun newspaper calling for a meeting of all Villagers interested in deep sea fishing.  Sixty-three people showed up and the first group was designated as “Charter Members.”  All members who enrolled after that were called “Associate Members.”  A set of by-laws was voted on and “Captain Bob” set up our trips to the Gulf and the Atlantic.
The Villages buses were used and there were not enough people to charter a boat so Captain Bob had to call ahead to tell them we were coming and hope they had enough room for us.  They would stop for dinner on the way home and we chatted about the ones that got away and the ones that didn’t.
It didn’t take long for the membership to grow and to decide which boats were best.  Captain Bob stepped down from the presidency in 1998 and “Captain Bud” Wiley was voted in.
With his knowledge and expertise in fishing, the club reached a membership of almost 200.  It became necessary to charter boats to allow us to accommodate our large group.  The Village buses became too expensive so carpooling was started, which turned out to be great.
Our first annual Fish Fry was in 1999 and it was quite a success. “Captain Bud” stepped down in 2000 and “Captain Everett” Belter was voted in.
The club grew in membership, things continued to improve and it was necessary to start having two trips in some months to assure that everyone had a chance to make a trip.  Just as many fish were caught at Crystal River as there were anywhere else and the Boat Captain always tried to see that plenty of fish were caught.  So Crystal River became the most popular trip each month. As the Club continued to grow scheduling 40 to 45 charters per month in the summer and around 55 per month in the Winter, between the Atlantic and the Gulf of Mexico, was common. The Club works with Captains out of Crystal River, Yankeetown, Cedar Key, Homosassa, Hernando, Tarpon Springs, St Pete, St Augustine, and Ponce Inlet.

​Ken Jagodzinski is the current DSFC President.  He assumed this role on January 1, 2022. Ken is an avid fisherman with interests in offshore, kayak and surf fishing.  He frequently enjoys charter fishing on both coasts, the Keys and long haul multi-day trips.  Ken's latest passion is slow pitch jig fishing.
​

Past Presidents of the Villages Deep Sea Fishing Club 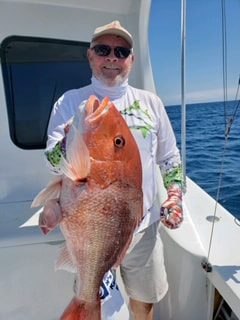